Many Things To See And Do In The Lot Et Garonne

The department of Lot-et-Garonne has a lot to offer its visitor, so much so that it is unarguably branded as the Tuscany of France.

Whether you have the time to fully explore and appreciate the department or you only have a few days to enjoy the place, you will leave with memories and an understanding of a world that people thought no longer existed.

Lot-et-Garonne may not be as iconic and famous as the Eiffel Tower, or as talked about as French macaroons, but it doesn’t mean that it isn’t as spectacular or a beautiful as the other places and things that make France one of the most coveted tourist destinations in Europe.

This department is located in south-west France to the south of the Dordogne and north of Gascony. Its northern landscape is mostly comprised of forested areas, wooded slopes, and small scale farming spots.

Its southern part, though, has more meandering fields and calm, quiet roads passing through charming countryside.

Lot-et-Garonne is an ideal destination if you prefer a vacation away from crowds of tourists and if you want to be more in-tune with nature.

This department is one of the best spots for relaxation, easy hikes, and cycling. There are also more sights to see, like castles and bastide towns), in the northeastern part of Lot-et-Garonne, and you'll see even less tourists further south.

Without further ado, here are the 20 best spots in this department:

Chateau de Bonaguil was the last of the equipped castles in France.

The chateau, classified as a historic monument since 1862, is a military marvel. It covered 7500 square metres, featured state-of-the-art artillery during its time, for defense and in adapting the defensesfor protection against it, but it was, unfortunately, outdated by the time it was completed. It was never attacked, so its purpose was never served.

Nevertheless, it serves another purpose: to attract tourists and promote the department. The castle still has its medieval vibe. It has a total of six towers, one of them considered the most beautiful in the entire country, and they were adorned with embellishments that made the chateau a jewel of the time the lords were living there.

For the children, there are also workshops where they could etch on hardened clay, like the graffiti found on some of the walls of the towers 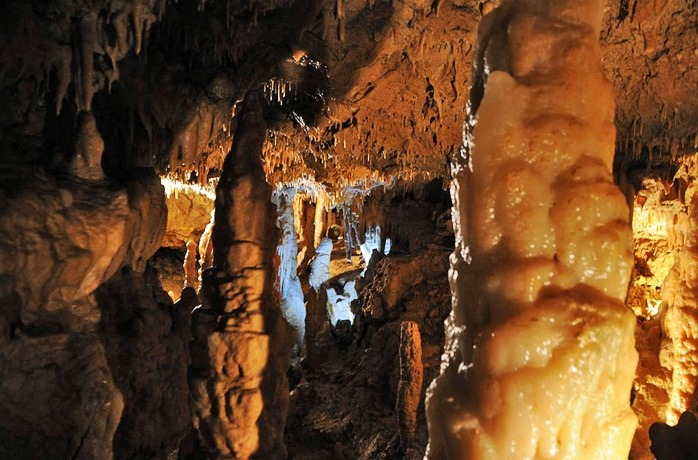 The Lastournelle Cave or Grotto de  Lastournelle  was discovered in 1878 when farmers living on the property dug down and attempted to find a water source by drilling a well.

They, of course, didn’t find water, but they discovered the Lastournelle caves that have developed for over 255 million years, building up stalagmites, stalactites, and incomparably rich limestone tapestries.

45-minute guided tours of the caves are available for tourists. These tours allow you to explore this one-of-a-kind subterranean world.

The tour follows the natural formation of the caves and is led by tour guides who also give information about the place.

Musee des Beaux-Arts d’Agen, or Museum of Fine Arts in Agen is one of the most substantial in the southwestern part of Lot-et-Garonne.

It is situated in the historically-rich center of the department. It presents a vast panorama of the history of art paintings, furniture, earthenware, and sculptures from the 16th to the 20th century.

The Museum of Fine Arts in Agen is famous for its exceptional compilation of 18th and 19th century Spanish works that includes Goya’s paintings.

The rooms in this museum showcase archaeological artifacts from Lot-en-Garonne, C. Aboussouan’s, the Lebanese diplomat, oriental antiques, and fine paintings collected by the Duke of Aiguillon.

It also boasts of European paintings from the 16th to the 19th century, including works of the brilliant Claude Monet.

Latour-Marliac is one of France’s best-kept secrets. It is the official creator and supplier of Claude Monet’s iconic water lilies.

There are a lot of water lilies and lotuses in the nursery of Latour-Marliac, the oldest of its kind in the entire world.

This site has also become one of Lot-et-Garonne’s most coveted tourist spots. In 2004, France’s Ministry of Cuture and Communications named it “Jardin Remarquable” for its exceptional beauty and historical importance.

Once you see this garden, you will understand why and how its water lilies made France famous for it.

The nursery boasts over 300 varieties of water  lilies in the  French National Water Lily Collection, and thousands more in their cultivation pools, the stunning glasshouse that houses  the Victoria, a giant water lily from  the Amazon, manicured gardens, an impressive bamboo collection, a museum, and a boutique.

Things to Do in Lot-et Garonne - Pont Roman de Barbaste

The Roman Bridge of Barbaste is a bridge constructed between Barbaste and Nerac, near Lavardac in Lot-et-Garonne, next to the Mill of Henry IV.

It was built in the 13th century and this bridge, together with the fortified mill next to it, will immerse you in the medieval times.

The Pont Roman de Barbaste has been fully equipped for defence and some remnants of its artillery are still present to date.

It was initially owned by the family of Albret, the young Henry Navarre and would-be Henry IV.

The structure was ravished by a great fire in 1937, though, and was completely rebuilt after.

MiniStoria, a small and unusual museum in Lot-et-Garonne, is situated at the foot of the famous Chateau de Bonaguil, but this small museum is nevertheless a tourist attraction in its own right.

It features spectacular dioramas that are of interest to children and adults alike.

It also presents convincing miniatures and tells a lot about the history of the department, as well as facts about other topics like the legendary Titanic.

It might seem like an ordinary museum, but it actually presents its exhibits in such a way that children will enjoy learning and wonder why other museums didn’t operate that way.

If you think that Lot-et-Garonne has nothing else to offer except quiet countryside  walks, nature hikes, and  interesting museums and art galleries, Les Musee de Mysteres or literally translated Museum of Mysteries in Marmande will get your brain gears shifting and turning.

This museum, unlike others that feature masterpieces, lets you enjoy an hour of adrenaline high with your family, friends, or colleagues as you try to solve the mysteries they have in store for you.

You would have to search, manipulate and move objects, and use your logic and judgment to be able to escape before the timer runs out.

There are several adventures available, so choose wisely!

You will see many architectural wonders across Lot-et-Garonne in France, and Eglise Saint-Eutrope is no exception.

If you love old churches and rustic settings, you will love this place.

This church is situated in an old and quaint town of Allemans-Du Dropt.

This town has a lot of lovely houses, but Eglise Saint-Europe is the highlight and the cherry on the cake. It hasn’d been as famous until the 1930’s when it became a tourist spot.

The church’s interior is lined with fresco paintings and it emits a cozy vibe. It is definitely well worth a visit if you are within the area.

Most of the folks the visit Lot-et-Garonne are a creative bunch who appreciate arts, history, and culture, but it does not  mean that  they are not down for a bit of a nightlife… and rugby.

Agen is relatively quiet in January, since there are some restrictions on the opening hours of some establishments, but Havana Cafe is the exception, so you can enjoy dancing, quality service, and great cocktails any time of the year.

Chateau de Duras is a castle located in the town of Duras, in the department of Lot-et-Garonne, France. Like the Chateau de Bonaguil, it was also considered a historic monument in 1970.

The first Duras Castle was built sometime in the 12th century on a rocky outcrop that overlooks the Dropt valley. The Bouville family initially owned the castle, until it was seized in 1254, from the Viscounts of Benagues and Bezaume by England’s King Henry III after an uprising of the Gascon Lords.

That was not the only upheaval that Chateau de Duras has encountered, though. As a matter of fact, through the middle ages, French Renaissance, and French Revolution periods, the castle has seen a number of upheavals.
There are tours available to see this castle, where guests are given a heavy dose of history as they visit all 30 rooms of Chateau de Duras.

The Cruises of Prince Henry takes you to a trip along the most beautiful and picturesqueriver port in all of France.

The cruise starts in Aquitaine, from Nérac en Albret, where you will sail on the Baïse, a lovely French river that has retained its authentic and natural charm. This river crosses Lot-et-Garonne and Gers in the center of Gascony.

There are individual and group tours available. Guests could also opt for the lunch cruises, where they can enjoy the soft river breeze while savoring authentic French cuisine.

La Bastide de Laparade is a small fortified village in the heart of Lot-et-Garonne.

It has been founded in 1265 on a plateau over 155 meters above the Valley of Lot.

The bastide provides a panoramic view of the towns and cities below.

Aside from the majestic view, guests will also learn a lot and gain more understanding of the rich and colourful history of France, as told by a seasoned guide and storyteller.

Moreover, guests will finally understand why prominent historical figures like Charlemagne, Alphonse of Poitiers and so many others desired to become master of bastide de Laparade.

The Basilica of Notre-Dame de Peyragude in Penne d’ Agenais was a significant stopping point on the road to Santiago de Compostela.

Because the basilica was constructed outside the mighty castle walls, it received the most damage during the string of wars between Catholics and Protestants, as well as between French and Englishmen.

On 1653, it underwent its third rebuild, as a response to a pledge made after the plague had killed half the population of the town.

It needed another rebuilt in 1842 when church stone was sold off to buy building materials during the revolution.

Lastly, in 1896, the large neo-Byzantine inspired Basilica that we have today has been built with its shining dome. Up to now it is still widely-visited by pilgrims and has spectacular views.

When you enter the old town square, you would pass under the huge tower of the ostentatious Gothic St-Nicolas that has star-vaulted high ceilings and a Renaissance mausoleum.

The other and more popular church, 15th century Ste-Foy la Jeune, contains faded and fugitive frescoes dating from the period of St. George to St. Foy of Agen. St. Foy was a 3rd century maiden who was burned by the Romans.

Aside from the colorful frescoes, the hilltop location of the Pujols offers stunning panoramic views of the nearby countryside.

The town also has quality restaurants where guests can enjoy top-notch French cuisine while gazing at the lovely view.

The department of Lot-et-Garonne has a lot to offer its visitors, so much so that it is unarguably branded as the Tuscany of France.

Whether you have the time to fully explore and appreciate the department or you only have a few days to enjoy the place, you will leave with memories and an understanding of a world that people thought no longer existed. We look forward to welcoming you here at gone fishin in the sunny lot et garonne

Thing To see and Do In The Lot et Garonne - Museums